Day 1: One step ahead, right into a wall

On the up side:


-I got one set of RP parts printed on day 1, I assumed I would not get much of anything done
-Installed Redsnapper Repsnapper (I keep calling it redsnapper, and people get getting hungry), found an out of date RepRap Wiki page for Repsnapper.  Luckily half the dev community for RepRap are in and out of #reprap in Freenode IRC all day and night.  Tim Schmidt, they guy that runs the github for Redsnapper was in there and straightened me and the wiki page out.  Check it out, he has written a a pretty great on how to install Redsnapper
-Ordered $500 worth of parts for the printers (all money from prior RP sales)
8  4218L Nema 17 steppers from Alltronics (I have two others in my office, so that's enough for two more printers
1 Groovemount for Makergear's Groovemount thermal barrier
2 36mm brass barrels from Makergear
1 .35 Bighead nozzle from makergear
2 V3 Hybrid Groovemount 3mm thermal barriers  (I have the rest of the stuff in hand to finish off 2 hot ends), and I plan to use Rick's Groovemount as a jig to make more (sorry I am cheap).
1 5lb roll of 3mm Natural PLA from Ultimachine
1 set Pre-Assembled RAMPS Kit from Ultimachine
1 1lb roll black PLA (for calibration, from what I understand black is easier to calibrate with)
32 PLA sliders for Tesla893.  I can't print in PLA and he decided to help me out with PLA sliders.  He is awesome


So there goes $500 in about 20 minutes.  But that should give me everything I need to get up to the testing point on 2 more Prusa.  Still need more stuff but I am sure I can sell enough RP sets to get me further along.


On the down side:


-My god forsaken Makerbot DC gearmotor died again.  That's 5, FIVE freaking motors failed!
I understood the justification when we didn't have gears worked well, but why would Makerbot put DC gearmotors in the ToM, a freaking $1200 Machine, when they have KNOWN for the last year that they are fail prone.  The Thingomatic seems to be  a great Cartesian bot, but it's extruder is junk.  I am done with the DC gearmotor extruder on my MB, time to go stepper.. on that note.


-When one asks a vender to not include the printed parts so you can get a few dollars off on the parts.  It's a wise move to go ahead and print those parts BEFORE your extruder breaks.  That way your not stuck with no printer to print the RP part you need to put together your new extruder for your Makerbot.  Not that I would EVER do that, just a note. :)  When stupidity meets procrastination, fun things happen


-I now have to solder stepper driver board for a stepper extruder for my Makerbot.  God I hate soldering.  I killed 3 opto end stops when I put my Makerbot together last year...  I have got much better, but none the less the all or nothing aspect of soldering scares the heck out of me.


-Speaking of Makergear.  I wanted to go Geared Stepper Extruder on all my bots, and use Prusajr's HBP on them all..  But SOMEONE has grabbed up all the really nice HBP and good priced geared steppers in the world. 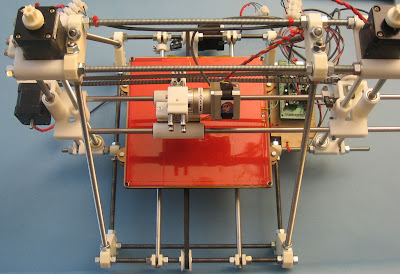 Ohh yea, Makergear hogging all the "good stuff" for his customers... In the words of James T Kirk " RRRRRIIIIIICCCCKKKK!!!!!!!!".


God you would think this guy pays attention to what the RepRap folks want and builds it or something.


Ahead on the RP, need to list, anyone want a set of Prusa RP parts for $100 plus shipping to anywhere in the world?. guess I have to get the Mendel going to print the replacement part for the Makerbot.  Unfortunately a day of soldering... yay.