10 Hours of being the "Rapid Prototyping Profit"

VID00333_003
Originally uploaded by Spacexula
Maker Faire NC in Durham was nice enough to let me have a booth at their 1st Maker Fair. I didn't set up my printer 1 time, each and every time I let a kid (and a few child like adults) do the setup. They did the zeroing, they did the warm up, 2 of the kids did my skeinforging. At the end up the day I added it up and my printer ran for 10 hours straight, with 32 separate prints. 30 kids set it up and 2 adults.

By the end of the day I hadn't ate in 8 hours, had lost my voice, and was missing most the the parts for my extruder (saw a kid run off with the big gear from Adrian's extruder, couldn't blame him really, it's so steam punk looking)

I did a interview with Spectra magazine, and ran out of Maker bot flyers 4 hours into the faire (I had a stack 4 inches thick!)

The fun part was watching the pride on the kids faces.
Posted by Unknown at 10:33 AM 1 comment:

My Mendel Reprap video build log. I hope it helps someone when they build their's.
There are 4 other videos on youtube, and another 15 some more to process and upload.
Posted by Neil Underwood at 11:06 PM No comments: 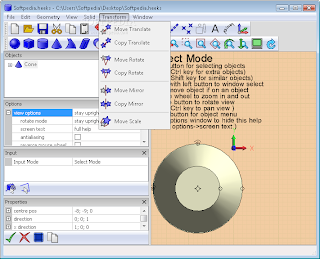 I have been using HeeksCAD for a little over a month now, I started using it because I only use Open Source products with my RepRap (I only have windows on my laptop because my wife prefers Windows). It has the look of Sketchup, but with a much more "clean" CAD/CAM GUI. I have used OpenScad, and it's great for modifying existed objects, but I just can't think that abstractly when prototyping. I need the ability to "draw & measure" my prototypes. Unfortunately, even though HeeksCAD is a great software, their Wiki and tutorial choices honestly leave a lot to be desired.

The current documentation can be found at:
http://code.google.com/p/heekscad/ (offical site, including VERY bare wiki)
http://groups.google.com/group/heekscad-users (very underpopulated user group)
http://groups.google.com/group/heekscad-devel?lnk=srg (amazingly active development forum, when was the last time you saw a development forum busier than the user forum?)
linuxgraphics.org a french forum, with a gentelman named Andre who is the moderator, great guy, and has made some awesome tutorials for this program. I have linked to Google translate version of this site for us anglophones.

I no longer use blender to modify my STL for the most part, this program renders STL in a much more informative manner than Blender (even though it only allows you to reorient, not modify the actual STL)

I have created a 5 video series on how to uses this Open Source CAD/CAM to make items specifically for RepRap printers. I also uploaded the 1st in a series of project videos showing how to make STL files, and then use Skeinforge to troubleshoot your parts. These are the project videos that I have shot so far, or made more than once and ready to film.

Anyway here is the 1st set of videos. I have also filmed the full construction of the Mendel X and Y carriages, but the video still needs to be edited, unlike these screen casts. If I should continue this project, please let me know in the comments. 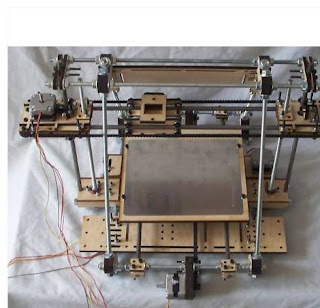 They are offing a full Lasercut Mendel kit to 10 Beta testers for $894 over at Ebay, and on the RepRap forum

They have not posted the files yet, but considering they are sending these 1st 10 out to help write the instructions, the design might not be final.

This changes SO MUCH I don't even know where to start:

-IF they continue to sell this kit at $894, it would be cheaper than a Makerbot Deluxe kit, for twice the build area, and a stepper extruder.

-Even if they sell this kit for $1000, that basically kills the $350+ RP pieces for Mendel, because the lasercut kit would be cheaper.

-If they are using the 5mm birch they used for the lasercut peices I just got from them, the design could be cut on almost any lasercutter, even the lighter ones.

Well, I guess that answers why they went though all the trouble of gearing up their electronics and lasercut production. We now have FOUR Open source, RepRap derived printers on the market!!!!

We also now have 3 independent sources of pre assembled electronics... It's going to be an interesting year!
Posted by Unknown at 5:31 PM 3 comments:

Getting Ready for Makerfair NC in Durham

Well I have sent off my paperwork, for the Maker Fair in Durham NC on the 25th. I am hoping to have some fun stuff to show there. At this point it looks like I will have:

-My Makerbot #469, with an as of last night 113C heated build plate ala Makergear(up from 80C),
-95% complete Mendel (missing power cable, usb board, ribbon cables, extruder barrel)
-My next Mendel will be in the proccess of being printed when I arrive, will try to print this in such a way that the parts can all be assembled before completeing (I will basicly print my new production files backwards)
-Some fliers from Makerbot and Thingiverse (Thanks Bre and company!)

I need to sell more parts, the project is now broke, and the Queen is sick of this project sucking up funds!

Trying to figure out what I should print and have on hand at the Fair. What to have it printing while I am talking, and what to have for people to handle. Also I want to print some stuff off to give the kids.

I have settled on the Zodiac puzzle, it's small, I can print them by the plate, and if they take them, I don't really care

I hope some of you guys show up!

BTW, I am using a new "production sheets" system. Basically it's all the updates by Vic and others from thingiverse, all organized into smaller plates (I stay within the 80mm plate unless absolutely necessary). It is also organized in order of construction. So basically you can just print 2 plates, and start putting your Mendel together, and print as you work though the rest of the files.
Posted by Unknown at 10:12 AM 4 comments:

We are now up to 133 feeds, and 100+ subscribers. I have added the RepRap Recent change wiki to the feed. This will allow the community to follow the Wiki like a blog... in theory.

At the very least it will allow the community to have MANY more eyes on updates.

If the noise level gets too loud tell me and I will remove it from the feed.

As of late I have found the photo stream, video stream, and ebay streams the most interesting.

If you want to preview the feed go to this link
Posted by Unknown at 4:34 PM 1 comment: