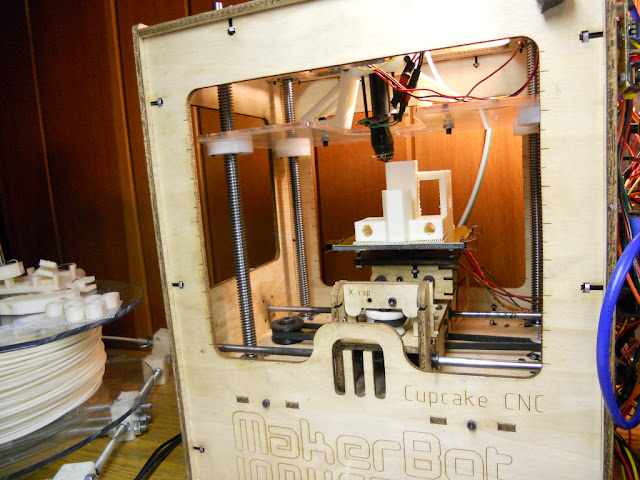 Around 18 months ago I had to make a decision, I had just finished watching Adrian Bowyer's Poptech speech.

I wanted a , and I wanted it BAD.  Looked into getting the RP parts, no luck, professional printed was going to be $1700 plus just for the plastic, and I could tell a repstrap was going to be outside my technical ability.  So it was a kit for me.  At the time there where two choices, Rapman by Bits From Bytes and Makerbot Cupcake.  To me at the time the Math was obvious:

Rapman:
-$1250 for the kit
-200x200mm build area
-single source nozzle
-Expensive electronics (what happens when you loose a board?  Which I read happens a lot)
-Superior Build Quality


Well if you’re reading this blog, I went with the cheaper, more open design.

Self Source Prusa Mendel
-$525ish
-Find Prusa Mendel parts on Ebay, http://www.emakershop.com/, RepRap IRC, or in the RepRap forums
-Get your electronics form Ultimachine.
-Get your Extruder from Makergear
-Get your hardware at the local fastener supply (type in your zip code and fastener supply in Google Maps)

I love Makerbot, and I love my Cupcake.  But the reason I bought my Cupcake was it was solidly the best deal PERIOD in RepRap at the time, and it had a great brand image.

But that was last year, now the Thing-o-Matic has the smallest build plate, with the least reliable extruder, the most expensive electronics, and the most complicated printer to put together.  I have been suggesting the Cupcake as a great alternative to the Mendel kits, but now MB has not a single product I could recommend.   It's a shame really.
Posted by Unknown at 6:03 PM