I have created a Google Bundle for RepRap related sites. This is a little different than the existing Yahoo Pipe.

-Google Reader now will automatically create a feed if nonare available for a site. So if we wanted, ANY webpage could be added to the bundle, including product pages, or non RSS news sites.

-I added a Truvio search for all Videos containing Makerbot and Reprap. Can anyone think of more videos to search? Is there a better video search engine that offers RSS? I couldn't get Rapman or Bits from bytes to work in the search without finding lots of rap videos other odd things.

-Added an RSS feed for the Makerbot and Thingiverse Google group. Lots of GREAT related information in these groups.

-It is REALLY easy to add the blog list to your blog sidebar. It's an option when you look at the bundle under Google reader.

-Just one more way for us to share information!

If you want to preview the feed go to this link

I am really interested in getting more non English language blogs into this bundle. PLEASE EMIAIL ME THE BLOGS I MISSED!!
Posted by Unknown at 11:26 AM 17 comments: 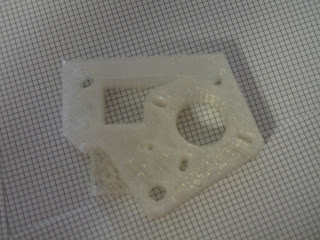 I have decided to give up on PLA for a bit, it's been 3 weeks since my printer has done anything but strip, or break. I am now going to tuck my tail and run back to ABS until there is a definitive answer on how to print with the two PLA variants on a Makerbot.

So back to the races!

I have posted all my Mendel pieces I have printed to date on Ebay.

I will continue to post all the thinks I print here, unless the community has a problem with it, in which case I will jut keep them for myself.

Have fun and happy printing!
Posted by Unknown at 12:47 PM 8 comments:

I have recieaved several comments and emails asking where I am at now... So here are the bloddy details

Makerbot #469 was completed and printed well for 1 week. I was having build quality issues, but when I used the Makenbreak example gcode from Makerbot it printed perfectly, so it wasn't the printers fault, it was user error. I did manage to let my nephew print a Nintindo DS stylus, which he thought was the coolest thing. I continued to print pieces, but got sick of all the warping issues and decided to make the leap into PLA.

While trying to improve my build quality I slowly reduced my build temp with PLA. I learned the hard way that my thermistor was reading artificially high (Makerbot switched to 1mm thermistors, while leaving the thermistor table set for a 3mm thermistor). When I thought I was extruding at 190+ I was actually at 170, and managed to snap my retaining ring. I then spent the rest of the day trying to make a new retaining ring out of Acrylic (Note, if you have an operating printer, print a few retainers NOW (http://www.thingiverse.com/thing:958).

Once I built my ad hock retainer, I reassembled the nozzle and started printing again, this time keeping my temp above 200. After printing one more part my Thermal barrier gave way when I hit one of the sockets that hold down my build plate. I now had to buy a new Thermal Barrier.

I decided if I was going to do it I would do it right. I purchased 2 thermistors, 1 nozzle & barrel, and 10 feet of Ni chrome from Makerbot (If you buy Nichrome, buy it in bulk, you will need it eventually, and the price cut on larger orders is pretty good). I also purchased 2 PEEK thermal barriers, and a retaining washer from Makergear.

While waiting for my new nozzles to come in I decided to build a better build plate for my makerbot (those socket bolts are killers). Fortunately I had some scrap 1/4 acrylic sitting around the house and used my table saw to cut it into 5 in squares (I went with 5inch instead of 4 because Makerbot has stopped shipping end stops with their kits, and without an end stop, you can actually print 5x5x6 on your Makerbot. I then used the build base as a drill guide to drill 6 holes into the acrylic. To make counter sinks I used a 1/4 drill bit. Went to Lowe's and got some flat head machine screws (Couldn't find metric flat head machine screws, so went with Imperial, I know I will regret mixing, but you have to do what you have to do).

I can't say enough good things about Makerbot, Makergear, and Ultimachine. Everything I have ordered has arrived within 3 days, which is GREAT service from small companies when you use 3 day shipping. Everything showed up and I got my 2 brand new nozzles put together. Makergear actually includes a beefed up retainer with 3/4 inch PEEK barrier (I think it's 1/4 inch thick, and they machined in the ends of the PEEK so it can use standard 5/8 retainer rings (nice touch).

I got everything together, and started printing again. Everything was going great, but then I started constantly stripping my filament. No matter what temperature I used, no matter how slowly I extruded, also I noticed a slight tent of black in the usually perfectly clear substrait. Tore the nozzle apart and I had managed to do the impossible, I melted a PEEK nozzle. That made no since. I went to email Makergear for a little WTF moment, only to find Makerbot had emailed me WHILE I WAS MELTING THE BARRIER!

Karen with Makergear had emailed to inform me that their supplier had provided them with Delrin instead of PEEK, and that I should not use the barrier over the temp of 225C, I had been pushing 230+ the whole time I was stripping the nozzle.

That's where I am at now. As you can see, not much progress, but it's been fun. Plans are scaled back, but here is what I hope to do in the next few weeks.

-Update my Thermistor table on my extruder to insure that my temperature reading is actuate, purchase a remote temp gun to check the nozzle temp after the firmware update.

-Install my backup nozzle, and extrude at a lower temp. Continue to print Mendel pieces. My plan is still to sell the 1st printed set on Ebay.

-Create a few more you tube videos, some that I would like to get done in the next month.
-Installation video for Arduino with Sanguino and Reprap build libraries.
-Review of both 4042 (Ultimachine)and 4032 (Makerbot) PLA filament. Show examples of both printing.
-Start a series of videos on Skeinforge, showing how jogging each number effects print results (This one will be a long term project)
-Start a series of videos on Solid modeling for Rapid prototyping machines using Blender
Posted by Unknown at 9:07 AM 1 comment:

Charles Pax has done it again. He uploaded a really easy to build cardboard spool to Thingiverse. When added to a milk crate it makes a perfect filament spool with base. Take a look!

No more rat nests of twisted filament, and you get to keep your money.

Finished the Most obsesive Makerbot Build video to date!

I plan on also documenting my Mendel Build in the same way. Please pay not attention to the point in one of the video's where my 3 year old daughter picks up my safety cutter and starts swinging it around trying to get her fathers attention.... That was photo shopped in.