What the heck is a Thing-o-matic? 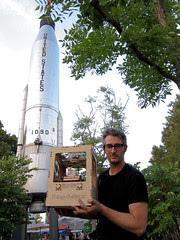 World Maker Faire New York 2010
Originally uploaded by Laughing Squid
Did http://laughingsquid.com/ just scoop Makerbot's announcement? That don't look like no Makerwave to me, but it sure does look pretty.

Looks like:
Internal electronics
Only 1 Rod to lift an all wood Z platform (No belt?)
X is now on the trolley instead of Y
Looks larger than your average Makerbot
Open on all 4 sides (one side looks sorta open)

Could this be the big announcement?
Posted by Unknown at 9:52 PM 7 comments:

Don't Play MineCraft, espeically considering it's free for the next few days.

My Brustruder is working perfectly, I have it on the loosest setting using 3d Ink cheap natural plastic, and it chugs along like nothing ,and what is weird, it it's super quite. I can't even hear the motor when the axises aren't moving, which I didn't think was possible for a gearmotor.

Went ahead and dropped $75 on a set of Acme Z rods from Ebay.

So between the Brustruder, My Makergear heated build plate, my .35 nozzle, and my freshly leveled build platform, I can for the 1st time just print, no need to keep the toolbox in the office with my printer (It has not left the office in the 9 months I have had my printer, till last week).

So now with a perfectly operating 3d printer what am I doing?  Playing Minecraft and not printing a dang thing.  I havn't designed anything in Heekscad, haven't turned a bolt on my Mini Mendel/Huxley, I even stopped printing my 7th Mendel (I know I said I was out of the Mendel business, but I can't get the idea of having a Makerbot, Darwin, Mendel, Huxley and Mantis 9.1 all in my office out of my head).

I hope I get over this Minecraft addiction soon, I have schoolwork I need to get done.
Posted by Unknown at 4:15 PM 2 comments:

The Dangers of Extruder development, accentually punching one's self in the face

I was doing failure testing on my new Brutstruder.  I was very proud of myself when my 1st version lifted a 2 liter of coke.  Well, after a few modifications, this one got up to 3 1/2 gallons of water, or about 27 lb worth of lift strength.  That's not quite a wades extruder, but considering the 1st 1/2 of the video was with 2 springs, the later I put 3 on, and they are compressed out, so this has a lot more pulling it can do with proper sprints, and 4 of them.

I would suggest watching the whole video, but if you are sick like Rick From Makergear, you might want to skip directly to 3:10 where I punch myself in the face with a Kysan Gearmotor.  No blood, but my nose is still sore. 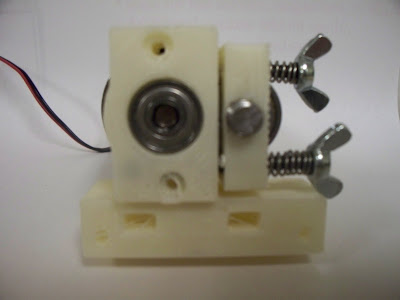 I have started the wiki page for my new extruder at the RepRap Wiki.

I thought I would be smart and put all four spring on the extruder for it's 1st test run, it literally squeezed the ABS so tight that it came out the other end flattened out (but by god it didn't slip!).  I think I need to test it with only 2 half springs tonight :).
Posted by Unknown at 11:27 AM 4 comments: 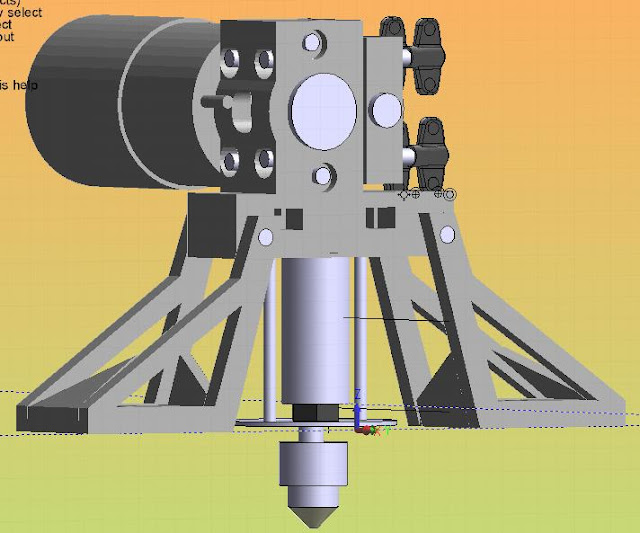 There are 4 people on the Makergear IRC (Basically the official IRC of the Makerbot folks, considering most of us that have operational Makerbots have some of Rick's goodies ) that have kept steering me back to this project.  Well It's finally "done".  I just need 4 new Wingnuts,  a 5/16 jam nut, 4 smaller springs (the one's I have are almost 3 inches long unspring, WAY too long. and a 1 inch bolt (Everything I have is metric, and getting a 8mm jam nut is not likely at Lowes).

This extruder was originally designed as a super small gearmotor extruder for the now Huxley, but since I have hit 5-6 snags on the  Mini Mendel, and I sold my extra set of electroncis, this is now a Makerbot Extruder.

Here are some design charateristics of this extruder:

It has extruded, but I will not upload it still it can print.  We have enough semi-functional stuff on Thingiverse already.

If you already have an extra gearmotor, mk5 drive wheel, and springs and want to Alpha test it just let me know.
Posted by Unknown at 12:13 PM No comments:

New 550 watt ATX to replace my burned out PSU ✔
New .35 Nozzles from Makergear ✔
New Aluminum Idler from Makergear ✔
Person going to show up to give me $500 for my Mendel (Giving him the RP on loan, he owes me that back when he gets printing)✔
Slotted Channel cut for my new experiment ✔
Pick on MakerBlock for selling his soul to Makerbot ✔
Folks showing up for 1st real Hackerspace meeting ✔
Posted by Unknown at 2:05 PM 1 comment: