After all the attention we got here at Fablocker with the vapor smoothing, I became intreaged with the amount of people who kept talking about 3d printed sex objects.  I was curious if it would work out well. 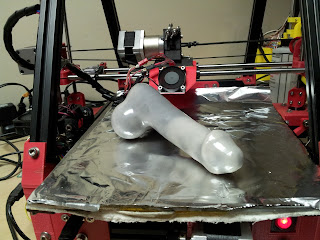 In the video above I list out the steps.  Some things of note:

-The Thermocromic plastic is now $32 a kg (guess it got popular)
-The part took 3.5 hours to print at .35 layer height, if I had used a lower layer height it would have took longer, and not really produced a much better part after the bath.
-This process only works on ABS, I have found no photo/video proof that you can get another 3d printed medium to respond as niclely to a chemical as ABS does.
-You really need to seal any holes in the outer surface of the part, so set the machine to do at least 3 perimiters, if you still have holes use your finger with acetone on it to melt and seal the holes.  If you leave the holes open the acetone vaport will go inside the part and make it MUCH software than it would otherwise be.