A guide to getting into RepRap (only my opinion)

I am always seeing people trying to get into RepRap Printing, but there is always the question of price.  I am no expert, but I wanted to lay out in a Post what I have seen.  I will go from the lowest price to highest price.

My 1st suggestion to every person trying to get into RepRap is to try to find a local RepRap/RepStrap owner.  There are several ways to track these people down, but some of the best resources are:

The RepRap Map
The Makerbot Map
Remember both of these have multiple pages, so look though all the pages each has different pins!
Regonal User Groups Sebastian over at the Wiki and forums has been nice enough to start a Regional User group for almost every area in the world (how does he find the time?).  If you have a printer, or want a printer update the RUG page in your area.  You never know who you might find!
The Hackerspace Map (They don't always have RepRap/Repstrap, but they will likely have some of the tools you need)

Cost: There has been talk that this can be put together for $3-400 dollars, I have only seen the original
Difficulty: Home made Repstraps are always an adventure
Reliability: Depends

The wiki page shows some details, but this is looking like the "official as it gets" RepRap.org RepStrap.

The Wild World of the Mendel/Sudo-Mendel

This is the contentious section of any list. EVERYTHING is debatable because no one to date has really built up a track record.  To keep the price comparison reasonable I am only going to compare the prices of their RP parts replacements.  Keep in mind that Once yo have your RP part replacements you still need your electronics, hardware, motors, belts and lasercut parts.  All these together will be $557 plus shipping if you  spend $260 for your hardware, belts and bearings at Ultimachine, Get a Wades extruder off Ebay (there is usually at least 1 up at all times now) for $30, Thick Sheets from Techzone/Botmill for $37 and $230 for electronics (4 major sellers of electroncis now, of varying levels of quality, check them out before you send them money!). 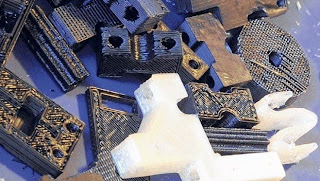 Cost: $60 - $400
Difficulty: Parts are usually printed in either ABS or PLA (HDPE has went out of style).  Easiest parts to put together.
Reliability: The VAST majority of all Mendels to date are made made this way.


If you can get these parts, they are the best to go with, but the supplies are VERY limited because they take 40-60 hours to print, and that is a challenging amount of time.
Folon Labs on Ebay

Cost: He has sold parts for $65 - $297, but the price is usually $150-$200
Difficulty:  The parts are Resin cast, so you will have to process them, and I have heard both good and bad things about his product (you always do).  I have not seen one assembled in the wild to date.
Reliability: Not enough info.

His website is Fotonlabs, and he usually has at least 1 set of cast parts up on his webstore.

Cost: $199 - $202
Difficulty: Parts are made to be drop in replacements for Mendel, but I have seen many people have issues with the assembly.  I have not seen a blog entry to date of one built "in the wild"
Reliability: Not enough info

There are 2 variaites of these parts, the processed, and the unprocessed.  Unproccessed parts are sold at Botmill for $199, and the processed parts go for $202 at the Techzone Ebay site (These are the same parts, Techzone sells parts to Botmill).  From comments in the forum the processing is quite intensive, and if you don't have a wood shop, you might want to get the proccessed parts, or go for the full kit (later in this post).

Cost: $245-$270
Difficulty: These parts are made on a CNC, not a laser cutter or cast.  The parts SEEM of a higher quality than all but the RP parts (which vary wildly in quality).  They should not require processing, but I have not seen anyone blog a build in the wild)
Reliability: Not enough info

FlemingCNC has been selling their kit, the Isaac Mendel, for a few months now.  I have not seen anyone blog a build, but the kit has changed material, and included the belts and gears.

Ponoko Darwin You can still get the parts for a Lasercut Darwin (the daddy of the BfB Rapman printer), for free or for a small donation to one of our favorite designers Vik.  It costs between $300-400 if you have Ponoko cut the parts, or between $200-$300 if you use BigBlueSaw.

Cut your own Techzone Mendel This should be possible considering they have uploaded the source files.  I don't think anyone has done it to date.

Laser cut Mendel by Decru This lasercut Mendel was Decru's master's thesis.  I dont' know if it ever printed, but again, you can upload the files to BigBlueSaw, Ponoko, or your local laser cutter and give it a go!

Cut your own Makerbot.  It can be done using Charles Paxes Muffin, The Makerbot svn, or the Routerized Cupcake CNC Body Panels by pandelume.  (

I don't know of any other RP replacements, if I missed one please Email me and I will update this post and repost!

I am only including full kits, with basically everything you need in the box.

Cost: $799
Difficulty: I have only seen one printer put together in the wild, and the guy said it was a hard printer to assemble (I can't find the link now, sorry).
Reliability: Not enough info.

Botmill sells them at their webstore, and Techzone sometimes puts the same kit up for sell on Ebay, but they are always available at Botmill.  They are the new guys to the game.  They seem to be having more issues than Makerbot did with Batch 1, but that is to be expected with any new kit.  I personally wouldn't buy it, but I am also the dude that had cash in hand when batch 1 went on sell from Makerbot, and STILL waited till batch 9 to buy.  $500+ is serious money.

Cost: $950
Difficulty: The easiest printer to put together, It would have took me 9 hours if I hadn't shot video.  The cartiean bot is almost perfect, but the Mk4 extruder can give you head/heart ache.  I love mine, but be preparts to buy some replacement parts! :)
Reliability: Very once you learn to use it, till then it's evil

The full kit at Makerbot has been $950 for a year now, which is great because their demand is though the roof.  They could price gouge, but they haven't yet.  For me it was a toss up between the RapMan and Makerbot.  I chose the Makerbot because it was smaller, and had a stronger support base in the US.  I have regretted that decision at times, but in the end I love my Makerbot (30 hours not shut downs at this point woho!).

Cost: $1,270 at current exchange rate
Difficulty:  More difficult to assemble that Makerbot, due to it's larger piece count, and acrylic material (don't over tighten those bolts!).  Able to print 4 times as large of area, and is significantly more acurate than Makerbot.  Also it can print independently of a computer (it has a LED screen where you can print your stl directly)
Reliability: Very once you learn to use it, but not as steep of learning curve as Makerbot

Rapman by Bits from Bytes was the 1st Commercial RepStrap, and is very much based off the RepRap Darwin.  It is still being sold, and is a rock solid printer.  The support base is thin inside the US, and even in Europe it doesn't seem to have sold nearly as well as the Makerbot.  Any person that considers a Makerbot, should also consider this printer, It's definitely worth the $300 difference if you can afford it.


PP3dp is selling their printer for $1500 for the 1st 100, then raising the price to $3000.  You can't use a standard web interface to purchase, they have to send you a purchase order.  They have only been our for 1 week, so I really would be very warry, but their printer does look awesome!

Cost: $2,565 at the current exchange rate
Difficulty: They come mostly assembled, but I can't say
Reliability: I have seen them print online, but there have been only 12 so who knows.

RepRapSource sells this kit on their website, and honestly it's sexy as heck.  It's the only all metal RepStrap, and looks mean as heck.  I don't know much about it, but just look at it!  :)  It needs rally bars.

Cost: $3,185 at the current exchange rate
Difficulty: It comes mostly assembled.
Reliability: It's a Bits From Bytes product, so likely pretty good.


This is currently the most expensive RepStrap avialable, but your likely getting what you pay for.  This machine looks like someone over at Bits from bytes took the joke Apple 3d printer a little too seriously:

If budget is not a consideration, this is likely the printer for you.  This is the machine that likely the folks over Stratasys where really hoping would not happen.  Good job guys, way to make the Mercedes of RepRaps, or I guess since they are British, it would be the Lotus.
Posted by Unknown at 12:26 PM