How many different ways can you mess up a Z axis? 9 so far. 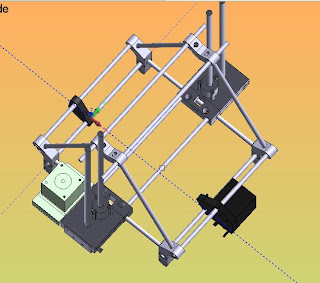 Brutis, my Mini Mendel rework is coming along nicely.  Because all the parts are so small, I can change the design, print off the part and attach to my test frame 20 minutes later, then throw the off part into a vat of Acetone to punish it for it's insolence.

I have settled on a different form of idler than I have ever seen for the Z axis, hope it works once I cut my belts.  The motor bracket floats on 2 parallel threaded rods, one only attached to the Z base, one that is the frame side bar.  To tighten you will just  tighten 2 wing nuts to move the motor bracket further from the Z base.  It's a knock off the Mendel Z Leadscrew Base with Motor Belt Tensioner by nicholasclewis, but in 2 parts instead of 1.

I was going a complete different direction with the X trolley, then I saw the rhys-jones's Mendel Multi Extruder Carriage.  I will have to rework my trolley (that's why you don't see it in the pic) because his would add 10+ mm in the inside capacity of the trolley.  Might just be enough to put the extruder on top of the trolley :).  Considering this project is only concerned with making a self replicating printer, if I only have 70 - 80 mm in the Z axis I don't care as long as it can print all the Mendel parts.

My run of trouble free printing ended.  My hot end started acting up.  Funny thing was Rick over at Makergear got a little perplexed, because he had never seen PEEK have a flowback issue with ABS, and all but demanded I send it too him to let him take a look.  So I sent him my hot end and went to a backup.  There's something profoundly embarrassing about letting another person look at your nozzel, but I think my constant issues with the Mk4 hot end has finally made him snap (he claims that his hot end is Gremlin proof, we shale see :)  He has never seen Gremlins like mine..

Also I just ordered the Power Resistor Heater Block from Makergear (hot end the Nophead way baby!). I personally didn't like his ceramic heatercore, fire cement and I just don't get along (which hurts because everyone else who uses them LOVES them... go figure), and the workings for a new hot end (big head nozzel, barrel (turned down on both sides?  never seen that), and a new PEEK thermal barrier.  Wife and kid will be out of town next week, so it's just me Makerbot, and my 3 half finished Mendels.

In other news HeeksCAD just released version 0.14.0, and this one is great for our community.  Now STL don't cause the huge memory leak, or crashing if you hit undo.  I have managed to run it now for 5 hours straight without a single crash, also the colors look a little better.  Dan & his group did a lot of work on this one.

It warms my heart to see Tony Buser has really ran off with my Printable Filament spool over at the RepRap wiki.  I like how he has made the sides stronger, and moved it over the Openscad,  Can't wait to see his setting under his Mendel!

If you ever get bored and want some good reading, check out the Recent Changes at the RepRap wiki.  They are now up to like 20-30 updates a day, there's a lot more than just Mendel instructions over there now and days.  Ohh and check out the Wolfstrap, and Eiffel repstraps.  Those projects are quickly becoming the new and improved Mcwire.

That's all for this week, well besides did you see Adrian's Ninja electronics set?  I swear I didn't know it was even possible for a RepRap to be that quite.

Edit  Just saw this. MSC industrial has PFTE tubing CHEAP, like $2-3 a foot cheap.  Lots of other goodies over there also.  Good job tesla893 over at the reprap forum!  Edit further..  PTFE tube bearings for a buck?  God they have EVERYTHING cheap.   I am in heaven.
Posted by Unknown at 10:00 AM